​The Newfoundland dog is a breed first developed in the region of Newfoundland and Labrador, Canada, on the cold, rugged, windswept northeast region of the continent. The precise origin of the breed is now shrouded in the mists of history. However, the Newfoundland is acknowledged as one of the older dog breeds in existence today.

The Newfoundland may have been first domesticated and developed directly from the wild by the Algonquin and Sioux Indians. A giant dog was once a fixture on the great plains and eastern seaboard. Evidence for this dog has turned up in the archaeological record. Although many early naturalists agreed that the Newfoundland is a native North American breed, there is still much disagreement regarding its origins. European fishermen could have bred their dogs with the native dogs found on the island-- perhaps a cross with the Great Pyrenees. Interestingly, there is a legend that the Viking Leif Erikson was accompanied by a large black dog when he landed on the coast of Newfoundland, over 1000 years ago. Fact or fiction? You be the judge. We do know that the Newfoundland was first named by George Cartwright in 1775 when he applied the name to his own dog. The first documented etching dates to the late 1700s and was labeled The Newfoundland Dog -- Original Breed. It shows many similarities to the modern version: a large skull, massive size, and well muscled legs. The first Newfoundland breed club began in England a century later, in 1886.

Before the mid 19th century, the Newfoundland was known as the Greater Newfoundland to distinguish him from the Lesser Newfoundland or St. Johns Newfoundland, as the closely related Labrador Retriever was then called. Newfoundland dogs were originally bred for carting and hauling. They were commonly used to haul fishermen's nets out of the ocean, cart wood up and down the hilly streets of the Newfoundland out-ports, and perform other chores. They were also bred as water rescue dogs and are still used for this purpose. During the 19th century, the Newfoundland dog was a common sight aboard the dog walk on the sailing vessels that plied the Atlantic. On many occasions, both at sea and along the shore, these powerful, selfless dogs heroically rescued both passengers and crews from drowning. A Newfoundland is said to have aided the English sailors at the Battle of Trafalgar. A Newfoundland rescued Napoleon Bonaparte during his voyage back from exile on the island of Elba. A celebrated rescue was performed by a Newf during the wreck of the Ethie off the coast of Nova Scotia in 1919. Tang carried a line from the Ethie to shore during a storm and helped save all passengers and crew. These stories serve to illustrate the long-held respect and admiration for the breed. Today, the Newfoundland is still valued all over the world for his gentle nature and great loyalty.


By the way, a note on pronunciation: The word Newfoundland is not one that rolls of the tongue easily, and many people get it wrong (newFOUNDland or other mangled variations). If you want to start off on the right foot with the Newf people you meet, practice saying the name the right way. The accepted American pronunciation is NEWF-un-lund, while Canadians say new-fun-LAND.  You may also hear or read Newf and Newfie as common nicknames. 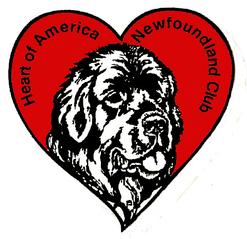 Acceptance and use of the information contained on this web site constitutes an acknowledgment that the user hereby releases and indemnifies Heart of America Newfoundland Club (HANC), the Newfoundland Club of America (NCA), and its members, Board of Directors and agents, from any and all liability and damages sustained by the user as a result of any information obtained from this web site.

This is NOT a puppies for sale website. Our dogs are first and foremost our family companions. However, we enjoy training our dogs for show, obedience, water and draft work.

Content Copyright ©  Heart of America Newfoundland Club (HANC). All rights reserved. Any use of photographs, videos, or other content is strictly prohibited.